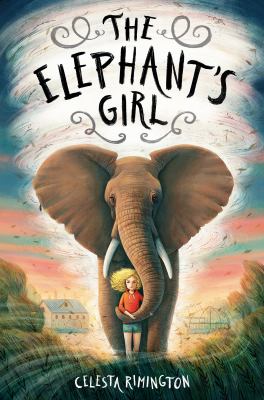 A magical adventure about a girl with a mysterious connection with the elephant who saved her life, for fans of Katherine Applegate and Jennifer Holm. An elephant never forgets, but Lexington Willow can't remember what happened before a tornado swept her away when she was a toddler. All she knows is that it landed her near an enclosure in a Nebraska zoo; and there an elephant named Nyah protected her from the storm. With no trace of her birth family, Lex grew up at the zoo with Nyah and her elephant family; her foster father, Roger; her best friend, Fisher; and the wind whispering in her ear. Now that she's twelve, Lex is finally old enough to help with the elephants. But during their first training session, Nyah sends her a telepathic image of the woods outside the zoo. Despite the wind's protests, Lex decides to investigate Nyah's message and gets wrapped up in an adventure involving ghosts, lost treasure, and a puzzle that might be the key to finding her family. As she hunts for answers, Lex must summon the courage to leave the secure borders of her zoo to discover who she really is--and why the tornado brought her here all those years ago.

Winner of the Newbery Medal, Coretta Scott King Author Award, and Kirkus Prize for Young Readers' Literature!  Perfect for fans of Raina Telgemeier and Gene Luen Yang, New Kid is a timely, honest graphic novel about starting over at a new school where diversity is low and the struggle to fit in is real, from award-winning author-illustrator Jerry Craft.  Seventh grader Jordan Banks loves nothing more than drawing cartoons about his life. But instead of sending him to the art school of his dreams, his parents enroll him in a prestigious private school known for its academics, where Jordan is one of the few kids of color in his entire grade. As he makes the daily trip from his Washington Heights apartment to the upscale Riverdale Academy Day School, Jordan soon finds himself torn between two worlds--and not really fitting into either one. Can Jordan learn to navigate his new school culture while keeping his neighborhood friends and staying true to himself? This middle grade graphic novel is an excellent choice for tween readers, including for summer reading. New Kid is a selection of the Schomburg Center's Black Liberation Reading List. Plus don't miss Jerry Craft's Class Act! 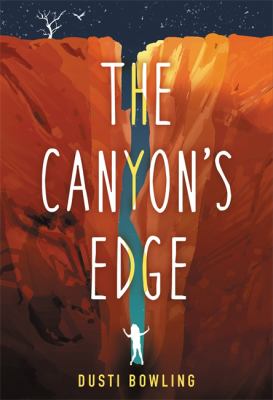 Hatchet meets Long Way Down in this heartfelt and gripping novel in verse about a young girl's struggle for survival after a climbing trip with her father goes terribly wrong. One year after a random shooting changed their family forever, Nora and her father are exploring a slot canyon deep in the Arizona desert, hoping it will help them find peace. Nora longs for things to go back to normal, like they were when her mother was still alive, while her father keeps them isolated in fear of other people. But when they reach the bottom of the canyon, the unthinkable happens: A flash flood rips across their path, sweeping away Nora's father and all of their supplies. Suddenly, Nora finds herself lost and alone in the desert, facing dehydration, venomous scorpions, deadly snakes, and, worst of all, the Beast who has terrorized her dreams for the past year. If Nora is going to save herself and her father, she must conquer her fears, defeat the Beast, and find the courage to live her new life. 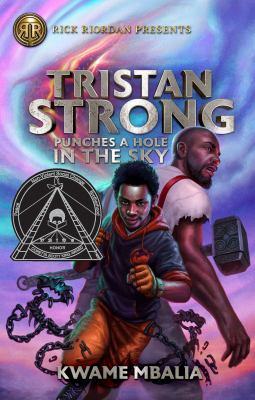 Tristan Strong feels anything but strong ever since he failed to save his best friend Eddie when they were in a bus accident together. But on his first night at his grandparents' farm, a sticky creature shows up in his bedroom and steals Eddie's notebook. When Tristan chases after, he finds himself in the middle of a battle that has left black American folk heroes John Henry and Brer Rabbit exhausted. In order to get back home, Tristan and these new allies will need to entice the god Anansi to come out of hiding. Can Tristan save this world before he loses more of the things he loves? 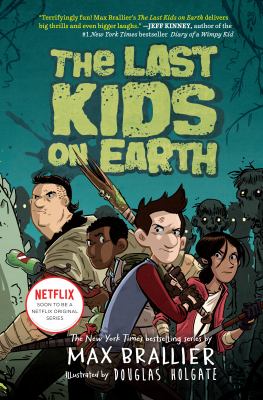 The Last Kids on Earth

"Terrifyingly fun! Delivers big thrills and even bigger laughs."--Jeff Kinney, author of the #1 New York Times bestseller Diary of a Wimpy Kid Diary of a Wimpy Kid meets The Walking Dead in this very funny post-apocalyptic graphic novel for middle-grade readers.  Ever since the monster apocalypse hit town, average thirteen year old Jack Sullivan has been living in his tree house, which he's armed to the teeth with catapults and a moat, not to mention video games and an endless supply of Oreos and Mountain Dew scavenged from abandoned stores. But Jack alone is no match for the hordes of Zombies and Winged Wretches and Vine Thingies, and especially not for the eerily intelligent monster known only as Blarg. So Jack builds a team: his dorky best friend, Qu∫ the reformed middle school bully, Dirk; Jack's loyal pet monster, Rover; and Jack's crush, June. With their help, Jack is going to slay Blarg, achieve the ultimate Feat of Apocalyptic Success, and be average no longer! Can he do it?  Told in a mixture of text and black-and-white illustration, this is the perfect book for any kid who's ever dreamed of starring in his or her own comic book or video game. And then grab the sequel, The Last Kids on Earth and the Zombie Parade, now a New York Times bestseller! 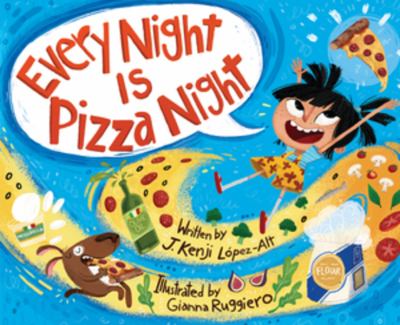 Every Night Is Pizza Night

New York Times Bestseller Best-selling author J. Kenji López-Alt introduces Pipo, a girl on a quest to prove that pizza is the best food in the world. Pipo thinks that pizza is the best. No, Pipo knows that pizza is the best. It is scientific fact. But when she sets out on a neighborhood-spanning quest to prove it, she discovers that "best" might not mean what she thought it meant. Join Pipo as she cooks new foods with her friends Eugene, Farah, Dakota, and Ronnie and Donnie. Each eating experiment delights and stuns her taste buds. Is a family recipe for bibimbap better than pizza? What about a Moroccan tagine that reminds you of home? Or is the best food in the world the kind of food you share with the people you love? Warm and funny, with bright, whimsical illustrations by Gianna Ruggiero, Every Night Is Pizza Night is a story about open-mindedness, community, and family. With a bonus pizza recipe for young readers to cook with their parents, Every Night Is Pizza Night will make even the pickiest eaters hungry for something new. 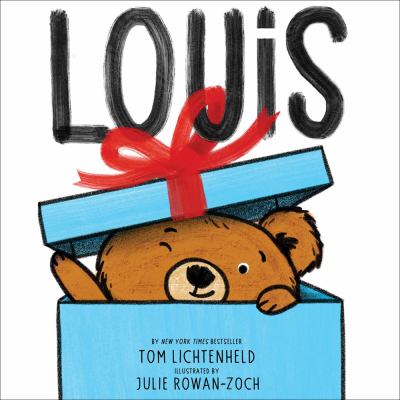 A beloved teddy canbear it no longer and plots his escape from his owner's suffocating affections in this laugh-out-loud picture book fromNew York Times best-selling creator ofGoodnight, Goodnight Construction Site andSteam Train Dream Trainfame, Tom Lichtenheld. Louis the bear has had enough. From day one, life has been one indignity after another. If he's not being used as a hankie, he's being hung out to dry--literally. (No one likes clothespins used on their ears!) This teddy is sneaking away just as soon as he can. Then again, no use running off in the rain . . .or during a show-and-tell routine. Maybe Louis has something to lose, after all.  This fresh and funny take on a teddy bear come to life is a salty and sweet, grumpy and tender, sly tribute to the ties that bind. 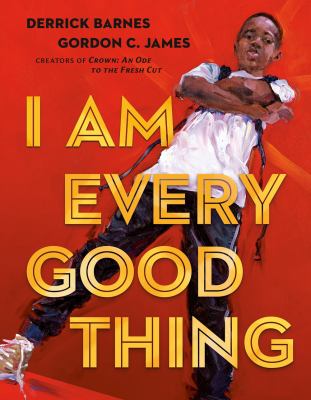 I Am Every Good Thing

Winner of the NCTE Charlotte Huck Award! An upbeat, empowering, important picture book from the team that created the award-winning Crown: An Ode to the Fresh Cut I am a nonstop ball of energy. Powerful and full of light. I am a go-getter. A difference maker. A leader. The confident Black narrator of this book is proud of everything that makes him who he is. He's got big plans, and no doubt he'll see them through--as he's creative, adventurous, smart, funny, and a good friend. Sometimes he falls, but he always gets back up. And other times he's afraid, because he's so often misunderstood and called what he is not. So slow down and really look and listen, when somebody tells you--and shows you--who they are. There are superheroes in our midst! 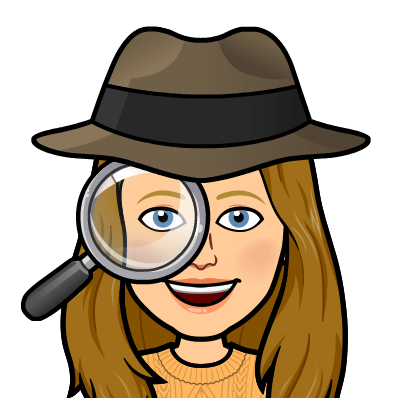 Books I Am Currently Reading